On December 7th, 2019, the first ever sister school baseball exchange took place between Lakeside High school and Hanamaki Higashi High School. A friendship game was played on December 7th between players from the Hot Springs area and Higashi. This video shows the event and the interactions between the two teams.

Hanamaki is known throughout Japan for its incredibly successful baseball teams. They are consistently one of the top high school teams in Japan and two of their recent graduates are playing in the United States: Yusei Kikuchi for the Seattle Mariners and Shohei Ohtani for the Los Angeles Angels.

The Sister City relationship between Hot Springs, Arkansas and Hanamaki, Japan has existed for 28 years, continually using education and cultural exchange as their main means of diplomatic relations. Hot Springs, Arkansas sends 2 delegations – a teacher delegation and an adult delegation – every year to Hanamaki, Japan. In return, they receive 3 student groups and a city employee every year. Every 5 years, the two cities celebrate their anniversaries with large delegations from each city. 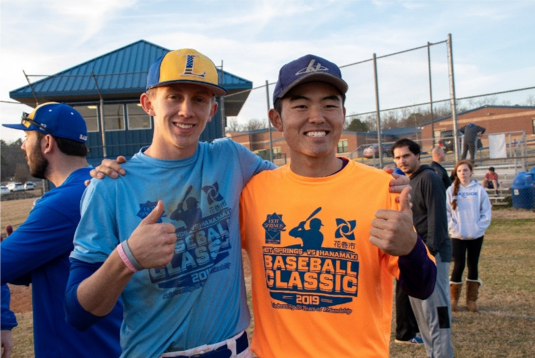 Two students from Lakeside High school and Hanamaki Higashi High school pose together as they are training and preparing for a game in Hot Springs National Park, Arkansas.

Mary Zunick, a member of the Hot Springs, Arkansas Sister City states that doing this baseball exchange was a first time occurrence between the two. Further, she says “Hot Springs was the original home of Baseball Spring Training, so the visitors from Hanamaki were pleased to visit the area that was once a field where Babe Ruth hit his first home run.” She goes on to mention that another major league player by the name of Shohei Ohtani was a graduate of Hanamaki Higashi High School and is often referred to as the Japanese Babe Ruth.

Just as excited as Higashi was to be in Hot Springs, Arkansas, the students of Lakeside High School were excited to meet Coach Sasaki, who was the coach of Ohtani  and Kikuchi who play for the Mariners.

Though the two sister cities and the coaches work hard to forge new paths and continue the strong the relationship they have through different delegations and activities, they can always use more help with funding. Lakeside High School has a Cherry Blossom Festival planned for March 7th to raise funds in order to support the Student Scholarship Fund to allow the students selected for the delegation to be able to attend and participate in the next exchange.